How Much Water Does a Water Softener Use? [You’ll Be Surprised]

Why Should You Know How Much Water Does a Water Softener Use?

If you use a water softener in your house to treat hard water, you’ll agree that they’re amazing inventions. Using a softener to avoid limescale in your plumbing, fixtures, and appliances may save you money – and water. However, this does not imply that water softeners are completely effective.

There’s no avoiding the fact that all water softeners require water to renew. How much water does it take for a water softener to regenerate? It is debatable.

Instead of following a defined timetable, most water softeners regenerate (clean themselves) based on consumption. The frequency with which the water softener is recharged is determined by factors such as water hardness and home water usage.

Similarly, depending on the hardness of the water, the amount of water consumed during softener regeneration fluctuates. During regeneration, some softeners may require 20 to 25 gallons of water, while others may use anywhere from 35 to 65 gallons, depending on a variety of factors.

Water quality, household water usage, and softener capacity are all factors that influence how much water is consumed during regeneration. A water softener regenerates with 20 to 65 gallons of water on average.

Why Does a Water Softener Regenerate?

The sodium ions in the water softener resin bed are positively charged. When hard water passes through the resin tank, calcium and magnesium ions are drawn to the resin beads, while equivalent amounts of sodium are released into the water, essentially swapping the hardness minerals for sodium.

In other words, a water softener’s lifespan would be cut short if it didn’t regenerate. You’d have to toss the resin out and buy a new one as soon as it was empty. Imagine how much that would cost. Flushing the resin and automatically replenishing it with additional sodium is far more cost-effective.

How Does a Water Softener Regenerate?

The cleaning procedure is known as “regeneration” begins when the resin beads get covered with hard minerals and need to be cleaned.

There are five phases to regeneration:

The term brine refers to salt that has been dissolved in water. To remove the hard minerals from resin beads, brine is required. During the fill stage, water flows into the salt storage compartment to produce the brine.

Brine goes from the salt storage area to the resin tank during brining. The cleaning chemical used to remove stubborn minerals from resin beads is brine. The brine and hard minerals are poured down the drain.

The brine valve closes once a certain amount of brine has been utilized. Except for the brine flow, water continues to flow in the same direction as it did during brining. Hard minerals and brine are flushed to the drain from the resin tank.

Backwashing involves a rapid flow of water up through the resin tank, draining deposited iron, grime, and particles from the resin bed to the drain.

A quick flow of water down through the resin tank follows the backwash. The rapid flow removes brine from the tank’s bottom and compacts the resin bed. The water softening system returns to soft water service after a quick cleaning.

During recharging, the softener is automatically switched to bypass mode, enabling hard water to flow freely throughout the house. When your water softener is regenerating, it is preferable not to use water. Water is sent through the resin bed to be conditioned once the softener has been refilled (softened).

The regeneration process takes a long time. Most people configure their water softener systems to regenerate overnight so they don’t have to wait until the next day to utilize their water.

The average softener schedules regeneration for two hours, generally between 2:00 and 4:00 a.m.

The length of the regeneration process is determined by various factors, including the efficiency and size of the system, both of which influence the number of gallons of water consumed for regeneration.

How Often Does a Water Softener Regenerate?

The frequency of water softener regeneration is also determined by a number of parameters, including the amount of water you use and the hardness of your water.

The majority of softeners have a reserve capacity of 20 to 25%. This implies that a normal water softener system will not regenerate until the resin has been totally exhausted. Instead, when the resin beads are between 75 and 80 percent saturated with calcium and magnesium minerals, a water softener regenerates.

To keep the resin bed from clogging, regeneration should take place at least once a week, although too much regeneration might waste water.

How Many Gallons of Water is Needed for Water Softener Regeneration?

How much water does a water softener use at a time? A water softener requires around 50 to 100 gallons of water to regenerate. This figure implies that the water softener is a standard single-tank system for a four-person home.

There are a few factors that influence the amount of water required for regeneration:

The Hardness of Your Water

The harder your water, the more water is needed for regeneration.

Size of The System

It stands to reason that if your water softener has a larger-than-average resin and brine tank, more water will be required to renew the resin.

Because a dual-tank electric water softener has two resin tanks, water is required to renew each of them. For regeneration, a single-tank system requires less water.

The Efficiency of The System: Does it Influence How Much Water Does a Water Softener Use?

The efficiency of the system will usually determine how much water does a water softener use. Water softener manufacturers are improving their systems to be more efficient than ever before, wasting less water during regeneration – but water is still required for this process.

Why does a water softener use water to regenerate? It’s only natural — water is more effective than any other method for flushing the resin. You might use another liquid to cleanse the resin tank, but water is the most cost-effective alternative because your water softener has easy access to it in your home.

By the way, if you’ve ever wondered why your softener produces such a lot of noise during regeneration, it’s because the motor starts and stops multiple times instead of operating continuously.

No, how much water is consumed during regeneration is unaffected by the amount of water softener salt in your brine tank.

Salt is required for the regeneration process. In the brine tank, salt and water combine to generate a brine solution, which is then pumped into the resin tank to distribute sodium to the resin beads.

If your brine tank is short on salt, you’ll need the same quantity of water, but there will be less salt dissolved in it. This implies the resin will have less sodium in it, which is necessary for the ion exchange process.

To be clear, lowering the amount of salt in the salt tank has no influence on the amount of water utilized during regeneration; it only makes the process less efficient.

How Much Extra Water Do Water Softeners Use in a Cycle?

Water softeners don’t require a lot of extra water usage. Let’s say your water softener is set to regenerate once a week based on your water consumption, and you have an on-demand system that is extremely water efficient.

If your system has to regenerate three times per week, and you have a single tank system, you may be looking at an additional 150 gallons each week. This is a significant amount of excess water, which will have an impact on your water bill at the end of the month. 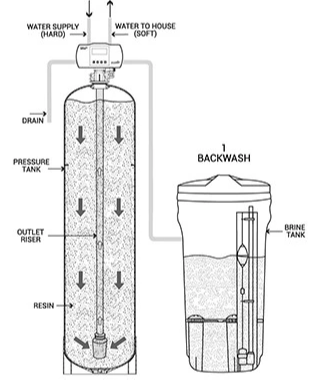 The backwash will take around 10 minutes, and during that time, you will have to flush the tank many times with water to rid it of brine water. This implies that depending on the size of your tank and the sort of system you have, you might require anywhere from 20-30 gallons to 40-60 gallons.

Depending on how efficient your water softening system is, the difference in the quantity of water you consume each year will be substantial.

If you do a weekly regeneration and use 30 gallons of water for backwash, you’ll have water usage of 6,240 gallons of water every year. However, if you have one that consumes 60 gallons of water, it will double to 12,480 gallons. Those additional water expenses will very certainly be reflected in the water bill throughout the year.

How Can You Reduce Water wastage During the Regeneration Process?

If you really want to save water, ensure your softening system only regenerates when it’s needed.

Some systems allow you to pre-set a manual regeneration time, which is referred to as time-initiated regeneration — let’s call this option A. The concern is that, while the system will renew at a suitable time, it may do so before the resin beads have been exhausted.

This might indicate that your water softening system regenerates when the resin bed is still 50% full with sodium, which is not only a waste of salt but also an indication that the system is renewing too often, wasting water.

The best solution is to configure the system to regenerate itself, which is referred to as demand regeneration: option B. Many softeners allow you to program in your usual water use as well as the hardness of your home’s water. When these softeners estimate that the resin bed would be exhausted, they initiate regeneration cycles, using far less water and salt than option A.

Can You Use Water While a Softener is Regenerating?

While your system is regenerating, you can utilize water. The issue with this is that you will not have access to soft water. You don’t want to use your water softener while it’s regenerating if you bought it to deliver soft water to your entire household, including your appliances and house water pipes.

Water softening systems are placed before your hot water heater at the point of entry into your home. As a result, they are able to offer softened water throughout your home. You won’t be able to use this soft water while the system regenerates. You’ll have to use your regular hard water, which might cause a variety of problems in your house.

It’s recommended to wait until your water softener has regenerated before using it so that only softened water passes through your pipes and plumbing.

What Would Cause Your Water Bill to Increase?

A leak in toilet

Many people may be surprised to learn that their water costs have increased. Toilets currently use roughly a quarter of all the water in most homes, so if you leak, your water bill might skyrocket.

A leaking faucet wastes over 20 gallons of water every day. Depending on how rapidly it drips, it might be more or less.

A broken pipe or leak

A broken pipe or leak may create big water problems and drastically increase your water bills, and depending on where you live and the kind of ground soil in your location, it may take a long time to repair.

If you have a problem with your water softener, such as one that cycles continually, has a leak, or regenerates much too frequently, your water costs will skyrocket.

If you have any leaks or punctures in your hoses when watering your lawn or garden, you may notice an increase in your water costs.